"Ask yourself if what you're doing today is getting you closer to where you want to be tomorrow. "

For Jeanne Weiss, this month's Body Physics Endurance Coaching Featured Athlete, the dream began in her grammar school Social Studies class. The day's lesson discussed the bustling Namche Bazaar, a trading post high up in the mountains of Nepal near the base of Mount Everest. Jeanne remembered looking at the pictures of the colorful, chaotic market that, each week, drew Tibetan monks, Indian traders, and the Nepalese residents to trade their goods and wares. She could not stop marveling at the fact that this small town was in the middle of nowhere, 12,000 ft up, and yet, so many people made the journey to visit it week after week. As she sat there, enthralled, Jeanne could not stop wishing she could experience it firsthand, so a decision was made, and a dream was born: one day, she would see it in person.

For many years, the image followed her--she glimpsed it in her high school textbooks, travel magazines, National Geographic--and so she continued dreaming of the adventure of a lifetime. But life took over: there were small children, a demanding job, and a million other responsibilities. As is usually the case, the children eventually grew up and went to college, but Jeanne's career as the Director of a Global Team at Motorola Solutions was in full swing. Her role allowed her to travel extensively all over the world, including Asia, Europe, and South America, and to visit incredible destinations, meet amazing people, and immerse herself in diverse cultures—something she truly enjoyed. Still, the trip to see Namche Bazaar and Mt Everest continued eluding her, remaining only an entry on the "laundry list" of adventures she one day wished to have.

In the meantime, however, in a true spirit of an adventurer, Jeanne continued adding to her "laundry list." She admitted to getting bored quickly and loving challenges--not only physical but also mental and spiritual ones--so her list continued expanding perpetually, both in length and in the degree of daring. For instance, after watching an IronMan race on TV one day, she wondered if she could ever finish one herself. The idea was not as crazy as it seemed: she was a runner in high school and college, as well as an avid cyclist. So, while she never took any swimming lessons, she decided to include that goal on her list as well. Because... why not?

However, becoming an Iron(wo)Man also turned into a long-term goal, and an exercise in persistence, since Jeanne needed to get to a place in her life where she could devote sufficient time and energy to the demanding training schedule. It wasn't until three years ago, at the age of 51, when Jeanne made her first attempt to complete the race. She chose the Madison, Wisconsin event, known for its hilly course. The choice proved to be a challenge Jeanne could not overcome that particular day. After a taxing swim, she recalled, "having nothing left in her legs." In the end, after pushing herself for 86 miles, she was pulled from the bike by the course marshals. The defeat was particularly devastating as cycling was her favorite--and strongest--discipline out of the three. She remembered feeling like her heart was pulled out of her that day. With that dream seemingly crushed, Jeanne didn't know how to pick herself back up. Finally, after three months of dwelling on her failure, she met with Coach Tom of Body Physics Endurance Coaching to discuss what went wrong that day.

After a thorough review of the day and her training strategies, Coach Tom settled on her poor race day nutrition as the main culprit. He also thought that the lack of strength training in her routine made it difficult for Jeanne to have enough endurance to finish. As Jeanne put it, her body was different than a 20yr old's, so her training needed to account for that. Consequently, Tom designed a schedule that took into consideration not only her specific needs but also the frequency of her travels. For someone who could go from Singapore to Krakow, Poland, within a single month, this was essential. So, Tom wrote out an exercise program that Jeanne could do right in her hotel room or at the on-site gym. The great flexibility allowed her to continue training even with her demanding job.

After training with Tom for several months, Jeanne was ready to make a second attempt at completing the IronMan in 2017. However, yet again, she was not able to accomplish her goal: on one of her training rides, she was hit by a car, which resulted in a significant injury to one of her hands. As she put it, "all the bones were smashed," and she had to have multiple surgeries to insert the necessary plates and screws to repair the extensive damage. Jeanne had to wear a cast for four months, but she didn't let that stop her--she chose the waterproof option so she could still swim and maintain her training schedule. Talk about persistence!

Finally, in 2018, after two long years and many obstacles, Jeanne showed up at the starting line of the IronMan in Madison, ready to try again. This time, however, she followed the plan she put together with Tom and... FINISHED! Her main takeaway from their discussions was to start feeding as soon as she got on the bike and continue fueling for the entire ride so that she would have enough energy left for the run. Jeanne also recalled that she had an alarm that would go off every 20 min reminding her to "do something" like eat, hydrate, or stretch. She also remembered that she chanted Coach Tom's "little things" throughout the entire event--his words of wisdom, covering everything from swimming technique to the heel position on the bike--became her mantra. As Jeanne put it, finally crossing the finish line, was one of the most fulfilling things she's ever accomplished--and the best day of her life--because it took her so long to get there.

After finishing the event in Madison, Jeanne remembered taking a week off and then coming back to Tom and asking him to switch up her training. She was ready to tackle something else that's been on her "laundry list" for years. It was time to fulfill the goal that has eluded her for so long and see Namche Bazaar and Everest Base Camp. She's waited long enough, after all.

This time, due to her "tricky" and tender knees, Coach Tom needed to tailor her training differently. To address her needs, he concentrated on balance and strength training with a particular focus on the muscles around her knees. To prepare her body for the challenge, Jeanne trained by doing box climbs with a weighted vest and doing lots of balancing exercises. Because she works best in controlled and disciplined environments, she appreciated working with Tom, who provided her with a regimented schedule each week that pushed and challenged her.

In the end, Jeanne, accompanied by her brother and a guide, found herself climbing a mountain trail towards the destination that has never left her thoughts. For nine days, the trio made the slow arduous trek, usually not seeing anything or anyone for 13, 14 hours before suddenly stumbling upon an isolated Buddhist Temple. The climb was challenging, but not as much physically as it was mentally. Jeanne described it as the hardest thing she's ever done because of the mental strength required of her. She compared the mental effort to racing an IronMan, EVERY DAY, for the entire 12 days of the trip. She had to play a "mind game" because each day was so long, so "boring," and so quiet.

Ultimately, however, on the day of her 54th birthday, the Universe aligned. As Jeanne turned the corner from the snowy peaks of the Himalayas, there it was: the enchanting Namche Bazaar. More than four decades after seeing the fascinating photo that captured her imagination, Jeanne fulfilled her goal. There were tears, but they were "happy tears." She had persisted, and her dream had finally come true. 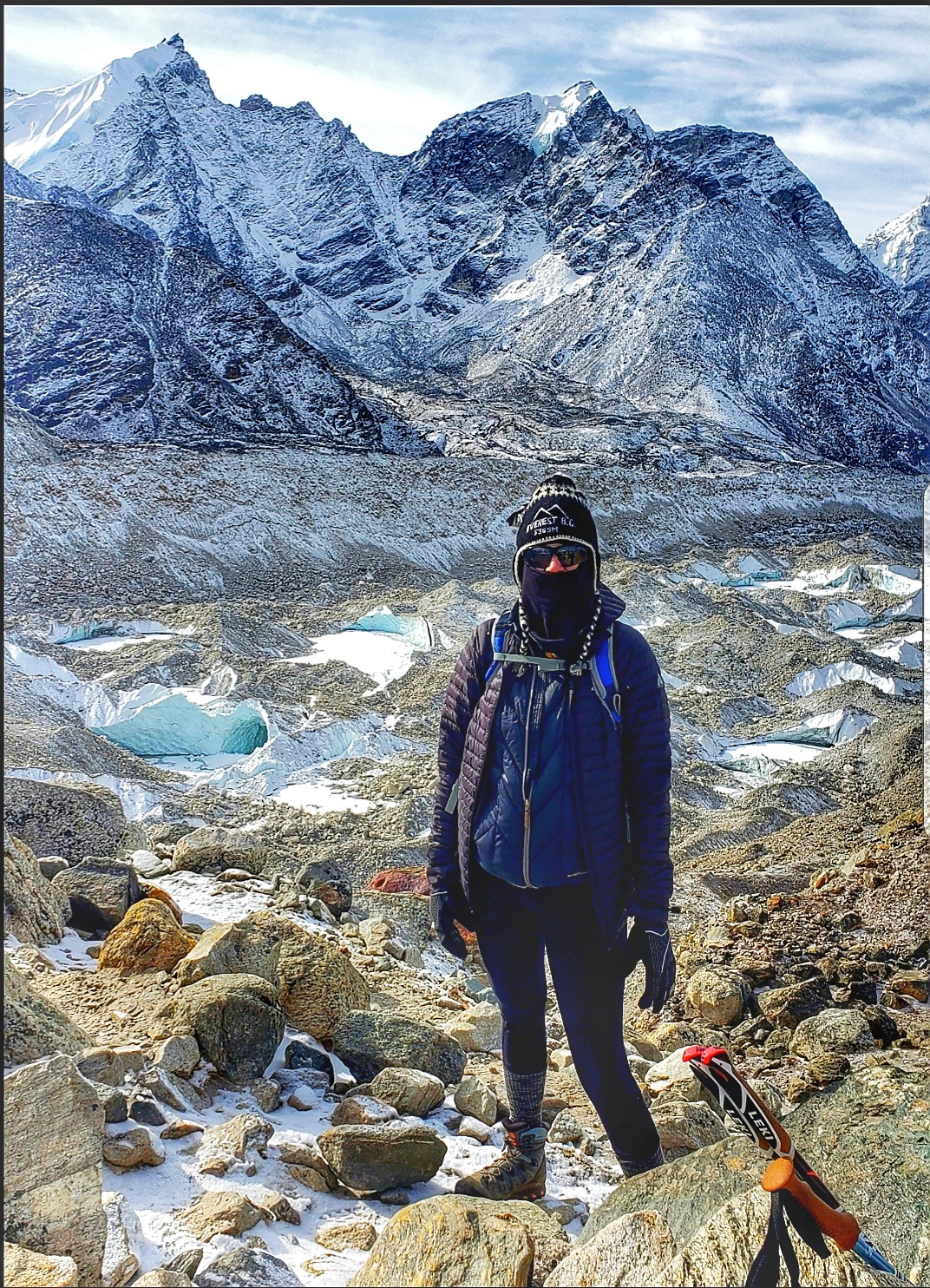 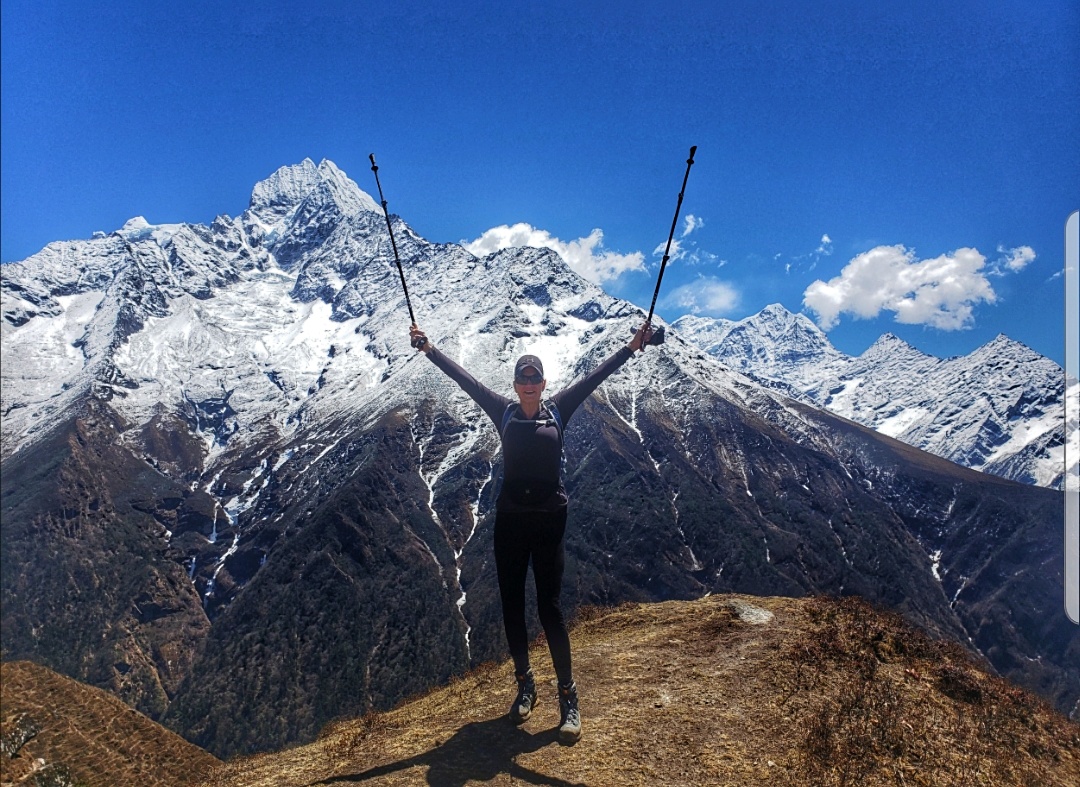 As Jeanne put it, she is "lucky to have seen so many incredible things" in her life. She feels like the opportunities she's been given are a blessing and that they make her a better person. Her appreciation for the "everyday life," all the little daily things that she might otherwise ignore, is so much greater now. But she still wants to do SO MUCH MORE. Her "laundry list" is never-ending: she laughs that the older she gets, the more willing she is to do crazier and crazier things. Maybe that's why she earned a Black Belt in Taekwondo a few years ago. Or did a two-week cycling excursion through the stunning Mosel River valley in Germany in September. In any case, she's already planning for next year's adventures--including an extremely challenging bike ride through the Glacier National Park on the famous Going-to-the-Sun Road. She's also bought a rower recently, so who knows what else she'll come up with?! One thing's for sure, though, she will, of course, PERSIST in getting it done.

Racing to the Midnight Sun: Interview with Michael Lauterbach

From Dreams to IRONMAN in 4 Months: Interview with Emily Rourke